This website is intended to bring public awareness to the ongoing and decades in development global climate engineering operations which have long since rendered natural weather a thing of the distant past. Every day around the world there are dozens of companies conducting hundreds of weather modification programs and altering global weather patterns, yet the vast majority of the general public have no idea such Godlike capabilities even exist. Methods being used range from conventional cloud seeding to advanced EMF and Laser cloud creation technologies. This is the commercial side of climate engineering, there is then the clandestine side of global operations.

Chemtrailing, scientifically known as ‘Stratospheric Aerosol Geoengineering’ (SAG) is what governments around the world are now proposing as a supposed solution to combat global warming. This is the process of using commercial airliners to inject millions of tons of substances into the atmosphere in an attempt to reflect incoming sunlight back out to space and hence cool the planet. Harvard University refers to this proposed artificial cloud layer as a ‘Solar Shield’. Although Stratospheric Aerosol Geoengineering is officially denied by the establishment, thousands of people every day around the world are documenting commercial airliners obliterating the atmosphere with long persisting jet trails that turn beautiful blue sky days into chemical/EMF white outs, which is exactly what governments ‘propose’ doing.

The toxic substances which climate engineers like David Keith ‘propose’ spraying are being found in alarmingly high quantities in blood, rain and soil tests all around the world. These materials include Aluminium, Barium, Strontium and Sulfuric Acid to name just a few. Aluminium is directly linked to Alzheimer’s, Dementia, Autism and Cancer. In 2015 Keele University in England announced that Bees now have Dementia from aluminium accumulation in their brains. Alzheimer’s and Dementia became the biggest cause of death in England and Wales in 2016 and air pollution is now the single largest cause of death worldwide.

The devastating impacts that these programs are having on all life on earth are incalculable. This so called global warming ‘remedy’ is destroying the entire web of life. We are now living in the sixth great extinction. Two hundred species of plants, animals, mammals, birds and insects are becoming extinct every 24 hours, and 70% of those extinctions are fungal related, due to the damp dark conditions being created by the artificial cloud layer smothering our planet.

The subject of ‘Stratospheric Aerosol Geoengineering’ and its impacts on climate, health and life on earth is undoubtedly the biggest issue of our time yet the silence from mainstream media is deafening. But it is not only journalists who avoid discussing this issue and asking questions. The so called “science community” is also working tooth and nail to cover up this genocide. All government agencies from the Department of Environment to the Environmental Protection Agency are playing a central role in ensuring that the environmental and health impacts of these programs are kept from public knowledge. It is a taboo subject for our so called “representatives” in government to talk about and people who are trying to bring this dire issue to the attention of the general public are attacked and ridiculed as “conspiracy theorists”. This eerie silence needs to be broken therefore we must all do what we can to sound the alarm because these programs are killing everything from the sky to the ground.

Please take the time to explore the information on this website as it is all vital information to say the very least. I called this website Climate Change Agenda because Climate Change is an agenda. A political agenda which has nothing to do with ‘saving the earth’ and everything to do with enslaving humanity with carbon taxes, climate action laws and a straight jacket of Environmental/Green control and surveillance which is now being implemented worldwide through the roll out of Agenda 21, and the 5G Internet of things. It is about Agricultural Domination, it is about Big Pharma profit, it is about ‘Problem Reaction Solution’, it is about legalizing climate engineering as the solution to fixing the climate change extremes that the power structure has manufactured. Eighty percent of the worlds economy is weather sensitive so therefore as President Lyndon Johnson stated in 1963 ‘He who controls the weather will control the world’.

Mikhail Gorbachev said in 1996 that ‘The threat of environmental crisis will be the international disaster key to unlock the New World Order’. This has been a long planned out agenda of global domination by the controlling elites and they have only gotten to this point because their entire deception relies on public ignorance to operate. But we are now living in the age of information and we can turn that ignorance into knowledge and understanding of the deception. Once that happens en masse the house of cards will begin to fall. If you are new to this information I recommend watching my climate engineering presentation video below which features the bulk of the information on this website and builds it into a picture that is easy to understand. In short climate engineering operations are causing global climate chaos which governments are now using, along with COVID-19, as the pretext to enslave the human race in a green communism/medical tyranny straight jacket. George Orwell’s 1984 is here. Thank you for visiting my website. Please download my flyer and distribute copies wherever you live and take action today to help return our beautiful planet back to the paradise it should be – The future is in our hands

Global sperm count decline, Geoengineering and the end of life on earth

Met Office – What is Geoengineering/Climate Engineering

Electronic Rainmaking by rain on request

Pilots, Doctors and Scientists Tell the Truth About Chemtrails 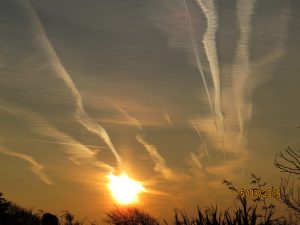